With stump mics detecting an increasingly feisty on-the-field battle between the Aussies and ‘the Poms’ during the last test, we took the temperature of the two nations’  fans off-the-field, to see how the sporting sledging has translated into online chat.

The hat-trick of England v Australia sporting head-to-heads over the past month, in Rugby League (Oct 26), Rugby Union (Nov 2) and Cricket (Nov 21), presented our digital team with an opportunity to look at levels of online chat as two of sport’s greatest rivals  locked horns.

Going into the Ashes opener, honours were even on-the-field with Australia having prevailed in League and England victorious at Twickenham.  But the story was somewhat different online, where English fans had opened up a commanding 2-0 lead during the Rugby League World Cup opener at the Millennium Stadium (68% v 32% by volume of online conversation) and a landslide victory during the Union encounter (89% v 11%) a week later. 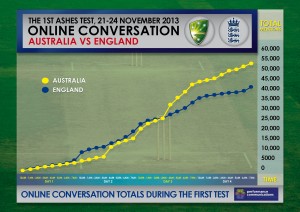 The first Ashes Test provided the third and final test, and throughout the first day, the English got off to a flying start both on and off the field as Stuart Broad ignored the sledges and put the Australian batsmen to the sword much to the delight of a nation of online night owls ignoring the fact that it was a school night!

Sadly, on the field the Aussies started to take control, and true to the maxim, the proportion of online chat increased as the likelihood of an Aussie win looked more likely.

After four days’ play and considerably more resistance than they ultimately encountered in the match, the Aussie ‘Fanatics’ had eclipsed England’s tired and battered ‘Barmy Army’ to win the online conversation count 52,777 v 41,057. 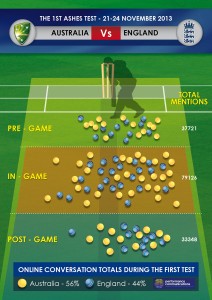 Abundantly clear from the three-match study is that English sports fans are more willing than their Aussie counterparts to defy the effects of the time difference and to pull an ‘all-nighter’ to support their team. England cricket fans averaged 1212 verbatims between 2-4 am across the four days of Test Match action, in comparison to an average of 285 from Aussie fans for the same two-hour period during the two rugby matches.

Examining a wider time-frame, which extended to a full day either side of each match, the study also looked at how well brands had fared in securing inclusion within fan chatter. For the cricket, only 0.27% of comments featured brand mentions and rugby league scored 0.41%. Brands did feature in 9.08% of the mentions for the rugby union match, but mostly name checks for the game’s title sponsor, QBE.

Andy Murphy, Head of Digital at Performance Communications who directed the study, comments:

‘Three matches have produced three interesting sets of results. The English seem a more willing nation of sporting night owls, but the old adage that fans sing when they’re winning seems very clear from what we saw over the four days of Ashes action.

‘What is disappointing is the level of brand presence within the conversations we have measured. Brands need to understand how, when and what fans talk about in order to become an authentic and credible part of the conversation.’

So, in answer to the question, it appears that in this instance, yes, Aussies do indeed only sing when they’re winning, or at least when they don’t have to get up early in the morning…Who knew they were so conscientious?