Can Britain sustain the growth in car sizes?

Last week, I tried to find a luxury London venue that could accommodate a Maserati Quattroporte, for an event we were organising on behalf of our Maserati client and the Centre of Entrepreneurs.

The CFE is a think tank that supports the role of entrepreneurs in promoting economic growth and social well-being and we have brokered a partnership between it and Maserati.

I digress… it seemed like a simple task at first but, as I started to call those responsible for the palaces and the museums around London, they almost laughed as I suggested putting a “real car” into their space. Apparently, doorways in Grade II listed buildings simply weren’t built with the size of modern cars in mind. 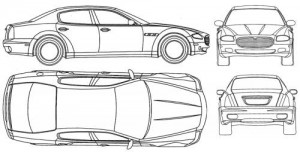 The result of this is that I now know the exact width of a Maserati Quattroporte, with and without mirrors (2100mm and 1948mm respectively, if you were wondering).

This is something that has affected me in the past. I have just come back from a year in the US and I was frequently taken aback by the size of their cars and would point this out to my American friends, much to their annoyance.

However, since returning to the UK, I have realised that we are catching up with our friends across the pond; and it’s not my imagination. The most popular British cars have increased in width by 16 percent in the past 40 years and the sale of trucks in the UK hit a five-year high in 2013.

It’s common knowledge that cars have been steadily increasing in size since the original 1959 Mini, which was a mere 1397mm wide. This has been mainly due to the addition of many safety features in modern cars. When the VW Golf was first introduced in 1974, it was 1610mm wide, but it is now almost 200mm wider, at 1799mm.

How much longer can this trend continue? 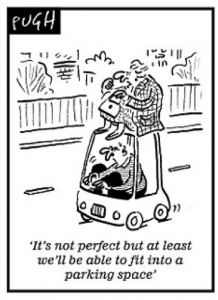 It appears that British infrastructure cannot keep up. British parking bays are now two inches smaller than the average car, forcing the government to scrap the minimum parking bay size, unchanged since 1994, to give councils the power to set their own space sizes so that 4x4s and SUVs can be accommodated – reducing the overall number of spaces available.

There are also fears that larger cars could result in narrow roads becoming impossible to drive down and the inevitable increase in ‘lane rage’ – when cars meet each other with no room to pass.

Soon, manufacturers and car buyers in Britain are going to realise that we don’t have the same expanse of roads and highways as the US and cars will simply have to fit.

There appear to be two roads ahead for the British car industry: a resurgence of the small car, such as the Smart Car; or an ever-increasing dependence on parking technology to help us squeeze into those tiny spaces – whether that is a parking spot on the high street, or the drawing room of Kensington Palace.