Dangerous, disrespectful and disruptive… Great – let’s do it

Every time I hear John Francome voice his opinion of the Victoria Pendleton ‘Switching Saddles’ project – such is the strength of his opposition to the idea and the publicity this brings, I wonder whether he is actually on the payroll of Betfair, its backers.
For those who don’t yet know, ‘Switching Saddles’ will see Olympic gold medal cyclist, Pendleton line up aboard Pacha du Polder for tomorrow’s Foxhunters Chase at the Cheltenham Festival, the mecca of jump racing, having never ridden a horse until exactly one year ago.Fantastic credit must be given to all involved in the initiative that they have managed to convert what was an intriguing idea for a challenge, from a concept into a gripping reality stretching all the way from Lee Valley Velodrome to Cheltenham’s famous natural amphitheatre. 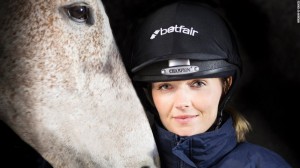 Having run a sports PR agency for over a decade, I know only too well the challenges involved in persuading clients to adopt bold ideas. If the idea is a good one, and if its strength comes from it being close to the edge, it is always easy to find a multitude of reasons not to do it.
But as witnessed for ‘Switching Saddles’, these reasons are often the key to an idea’s success. The chance to drive discussion, polarise opinion and set in motion a growing wave of disapproval can provide a perfect fan to the flames and guarantee sustained campaign profile.
In this instance, fortune has definitely favoured the brave.
Everyone involved has been brave. Victoria Pendleton’s switch to jump racing is not without danger, but the list of experts who have been recruited to assist her development have decades of experience within the sport, so no stone will be left unturned to minimise risk.
Personally I love ‘Switching Saddles’. As a cycling and a jump racing fan who likes a bet, I sit squarely amidst the target audience. I was already a Betfair customer, but I’m now a more committed one. That must be a KPI hit.
The project has not only been great for Betfair, it has been fantastic for horse racing. Having captured the imagination of the nation, with one of its sporting sweethearts at centre stage, the campaign has significantly enhanced the breadth of coverage of and interest in jump racing’s showpiece season finale.
It has also provided a fantastic insight into the sport, for both novices and the well-versed, including some great headcam footage of what it feels like to ride a horse at 30mph, over jumps, and fall off. Rather than being disrespectful to jockeys, as some have claimed, I believe it has served instead to shine a light on how brave and committed a group they are, commanding nothing but respect.
‘Switching Saddles’ must have been a hard one to get off the ground, but great that it did and all the very best of luck for all involved tomorrow – particularly Victoria – for what I hope will prove to be another highlight in the Olympian’s already glittering sporting career.
#GoodLuckVP