The explosion of eSports – what are the wider implications?

There’s no denying it – eSports are here, and they’re here in a big way.

Working at a sports PR agency, I’ve been acutely aware of the growing popularity of eSports and the influence that it is increasingly having over our younger generation for a while now. There’s been no shortage of media coverage outlining the explosion of eSports and the grasp it has over the YouTube generation, in which the best gamers become pseudo-celebrities in their own right.

However, something happened last week that shocked me and really highlighted just how big eSports has become. On Tuesday 22nd March, the FIFA Interactive World Cup was broadcast live on Sky Sports 1. Yes you read that right – SKY SPORTS 1. 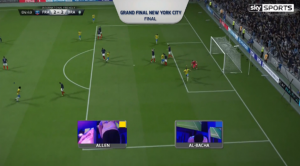 We are now in an era where the most popular live sports broadcasting channel in the UK is using part of its programming schedule to show live coverage of teenagers competing against each other at a football video game. People are actually tuning in to watch a live broadcast of a FIFA 2016 video game contest, between two people they have never met, but admire because they are great at video games.

And that’s not all – you’d be forgiven for thinking you were watching the Manchester Derby on Super Sunday. There were two real life commentators, in-studio analysts to discuss all the action at half-time and full-time, a raucous crowd of teenagers cheering as if they were in the stands at the World Cup Final at the Maracana stadium and of course footballing legend David Villa to offer his ‘insight’ throughout and present the winner with his prize.

If you want to see exactly what I’m talking about then you can view the tournament highlights here, on BBC Sport, under the football tab.

My initial reaction to what I was seeing can be accurately summed up by the Instagram that I posted immediately after the final of the FIFA Interactive World Cup.

While my initial shock at the fact I was tuning into Sky Sports 1 to watch a video game football match was very real, I’ve had time to think about it since and I get it – I’m just of a different generation (worrying to say at the age of 26) – this is a huge part of youth culture.

However, in the days since there is another aspect to the boom of eSports among our younger generation that has really sat uncomfortably and got me thinking.

What effect will this all have on the health of our nation in the future? A big question I know, but one that really has got me worried. There is no shortage of press coverage regarding the current “Obesity Crisis” that the UK is experiencing. Research shows that we have the second highest obesity rates in Europe – and I can’t see that changing.

Youngsters growing up in the YouTube generation who are into sports, now aspire to be the next Sean Allen or Mohamed Al-Bacha, not the next David Beckham or Cristiano Ronaldo.

When I was younger, I would watch my heroes play football on television, be inspired to try and emulate them and one day become a professional football. I’d rush outside to my back garden to practice. I’d spend hours running around, striking the ball at the goal screaming “MCCOIST” or “OKOCHA” as the ball hit the back of the net or practicing keepy uppies to improve my touch.

The next generation has moved on to a new form of entertainment, that wasn’t really there when I was growing up. Why wait until 5.30pm on a Saturday to watch a live football match, when you can watch live virtual football matches whenever you like. This generational shift in itself isn’t a problem and it’s great to see the new found exposure that eSports is getting in mainstream media.

I have to admit, my housemate and I, who are not exactly avid gamers, did jump up and celebrate when Mohamed Al-Bacha scored his 90th minute winner in the final.

That doesn’t change the fact I’d take watching Cristiano Ronaldo scoring a winner in a real live football match, over a live interactive alternative. However, there is no doubting that in the current YouTube generation there is an appetite for both real and interactive football and that is a very interesting cultural shift and is one that brands need to take notice of.

[…] colleague Neil Brotherston commented earlier in the year on the growth of eSports and its march into the mainstream and traditional broadcasting. If SuperData’s predictions that […]