Give Players Back Their Voice 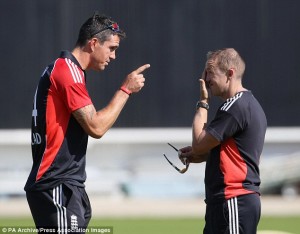 In a week in which the KP saga has brutally exposed the extent to which England cricket fans are kept in the dark about their team, it is refreshing to see the launch of a new website across the pond which has as its mission ‘to bring fans closer than ever to the games they love.’

‘The Players’ Tribune’ is the brainchild of recently-retired New York Yankees short stop, Derek Jeter and will provide a ‘new media platform that will present the unfiltered voices of professional athletes.’

In an era in which social media is encouraging anyone to share everything with everyone, the world of professional sport and its player communities look increasingly out of step as a ‘closed shop’.

Sure, players now make more media appearances than ever. They talk to the camera or microphone more than ever. But they say nothing.

In its frantic attempts to keep everything under wraps through the winter, and the subsequent toxic revelations of the last few days, ECB and the England cricket team’s concealment efforts have just served to alienate their fan-base. A long suffering fan-base who deserve more.

Cricket is by no means exceptional, just the most topical.

By providing ‘unique insight into the daily sports conversation and publishing first-person stories directly from athletes’ The Players’ Tribune aims ‘to transform how athletes and newsmakers share information.’

Why have players been gagged to such an extent? Across the sports marketing spectrum, the accepted wisdom has been that the ‘professional’ presentation of teams and players (as homogenous, clean-living automatons?) is key to facilitating the signing of multi-million pound sponsorships by risk-averse purse-holders within major blue-chips.

But no risk = no reward.

If I had a pound for every time I heard fans calling out for more personalities in sport… The personalities are there, but sporting stakeholders do their utmost to disguise and suppress them as part of the ‘professional development’ process. As a result, sponsors suffer.

Where everything else in life is becoming more transparent, continuing to blunt players’ personalities and gag opinion is an insult to fans’ intelligence and a threat to their loyalty.

As a cricket fan, right now I feel cheated. Players are people, not super-humans and fans understand that. Masking their frailties will be temporary and the truth will out. Fans need to believe what they’re watching. If a team is getting drubbed down-under you would expect some disharmony, as you would in a workplace where the tide is against you. To pretend otherwise is insulting.

The launch submission in The Players’ Tribune is a piece by Seattle Seahawks’ SuperBowl-winning Quarterback, Russell Wilson entitled ‘Let’s Talk About Domestic Violence’. Rather than seeking to bury the problem within the NFL, Wilson, who confesses to an aggressive past, suggests in the article how the sport can bring its profile to bear to help address the problem in society at large. Refreshing.

Players are not all the same. Fans are not stupid.

Let players speak their mind. Sport will be richer as a result and bonds with fans stronger. More engaged fans offer more commercial opportunities for sponsors.

As Professor of the Bleeding Obvious, I am far from confident that KP will be back in the England team any time soon. UK Editor of The Players’ Tribune perhaps?