Immortal Fans – The Power of Fandom

Occasionally you come across a truly inspirational campaign. This campaign changes perceptions of football fans, from hooligans to heroes – It is true Fan Power. 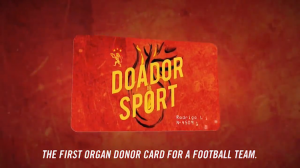 Concerned about the lack of organ donors across the country, a Brazilian football club decided to do something about it.

Harnessing the power of their fans and proving once and for all that football is one big family, Sport Club Recife asked for everyone to join the donor list. Fans joined using a Facebook app or applied online for the Sport Donor card.

The video below is screened at every match in the club’s Ilha do Retiro stadium, a venue that seats 35,000 but could be filled almost twice over with the number of people who have now signed up for a donor card – 66,000.

Has it worked? Well so far and organ donations have gone up 54 percent and the waiting list for organ transplants in the city of Recife was reduced to zero in the first year. The impact has also been felt further afield – Footballing giants Paris Saint-Germain and Barcelona, are both thinking about adopting similar campaigns