As we collectively bathe in the post-Olympics glow, it’s hard not to wonder how we’ll fare in the next one. Or about how this epic undertaking could be improved.

Despite lacklustre live attendances, this year’s event in Rio created plenty of sporting drama but could we raise the bar in Tokyo in 2020?

One of the most outrageous suggestions doing the rounds is to introduce F1 to the Olympic schedule, creating a one-off shoot-out to identify the best driver in the world. Fernando Alonso would jump at the chance, no doubt, but behind the craziness there’s a genuine argument to be made. After all, equestrianism sees the best horse and rider combination crowned champ. Why not cars and drivers? 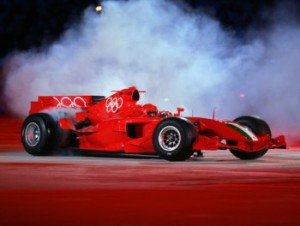 The thinking goes that you even the odds by putting all the drivers in the same car. This makes sense in theory but is also the point at which the whole concept falls over. Can you imagine the cost of engineering a grid full of identical F1 cars?

In reality, F1 is a red herring. After all, the end-of-season Race of Champions has seen nations compete using drivers from various racing disciplines in essentially identical cars for years. This event’s knockout format – or a purer time trial ¬event – could be introduced to settle the old argument over who is fastest, or which formula boasts the quickest drivers, once and for all.

Conversely, other sports could learn from what’s been happening at the Olympics. After tuning-in to watch the Team GB women’s hockey team win gold in a nail-biting penalty shoot-out at primetime on a Friday evening, there’s a strong argument for football to adopt a similar format.

That’s right, dispense with the boring extra-time shenanigans and cut straight to time-limited one-on-ones, the outcome of which would owe much more to the skills of a team than the lottery of a plain old penalty shoot-out.

With the odds stacked in the penalty-taker’s favour, players who miss from the spot under the current rules are usually castigated by fans and cast as villains of the piece.

With hockey’s approach the pressure is still on the taker, but the odds are more even and watching Neymar and company trying to dribble the ball around a charging goalkeeper would be far more entertaining than a traditional shoot-out.

If these ideas sound unlikely, it’s worth remembering the first official Twenty20 cricket matches were played as recently as 2003. Initially derided as a gimmick by purists, the shortest form of the game now commands some of the biggest live attendances in the sport and its all-action format is an established part of the cricketing calendar.

Even so, I wouldn’t bank on either of the suggestions above making it far beyond the odd blog or forum, but all sports need to remember they don’t operate in a vacuum. At elite level, professional sport is an entertainment industry, too, and while national success in a given discipline is an important part of the recipe – especially when it comes to participation – keeping spectators happy is a crucial ingredient for commercial success.