We have just been nominated for two awards at the Social Media Communications Awards for an Influencer campaign we delivered for our client Multipower. A sports nutrition company, they wanted to raise brand awareness and drive sales of their new product.

We developed a campaign largely targeted at influencers. Influencers are becoming, well more influential and we knew that the sports nutrition world had a large base from which to choose. We identified 20 people on Twitter and Instagram who we felt best represented the brand – they were up and coming stars of the fitness world, they had a wide reach and, perhaps most importantly, an engaged audience. 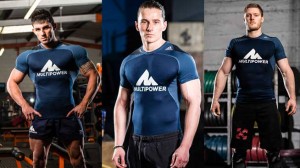 A smart influencer campaign uses the right people to get across your brand message to your target audience. In this case, we wanted to promote the new product and use the influencers to help bring to life the results people would see from using the product.

However we knew we had to build a campaign that was relevant and engaging so tapping into the advertising campaign to ensure a truly integrated campaign, we used the advertising strapline #MusclesInHD in our activity. Knowing that people in the fitness community are focused on their own body image, we offered each of our influencers a photoshoot with a leading fitness photographer to allow them to showcase the results of their training regimes. Each influencer was given a bank of branded imagery to use on their social media channels, using the agreed hashtag that enabled a natural and regular affiliation with the brand.

We also knew that the fitness community use selfies as a serious way to show off their bodies, so we worked with the photographer and influencers to create a video about ‘how to take the perfect fitness selfie’. This provided relevant content that tapped into the ever increasing trend of ‘how to…’ being the biggest search term on YouTube.

The results were staggering. Our objectives were to drive sales leads to the company website and in the month we launched our campaign, they saw a 58% Year on Year increase on traffic to the website and it was the best ever month in terms of traffic. In terms of sales, they had an 8% increase on the previous year.

We believe the success is down to several reasons:

1. Research: We carefully researched our influencers based on a variety of factors: reach was important but it wasn’t the stand-alone reason

3. Relevance: We worked with our influencers to ensure we were developing relevant content for them, their followers and also for our client. For example, they have developed training regimes incorporating the product and they also offer product discounts.