Inside The Ropes @ The Tour of Britain

Working within the Sports Industry it is easy to become blasé about the number of privileged opportunities that our team is presented with to step inside the world of professional sport, be part of the action and gather invaluable behind-the-scenes insights.

Our new ‘Inside the Ropes’ blog provides a regular outlet to share some of these insights. We hope you find them interesting. 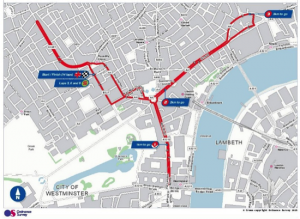 On Sunday, I joined the team as they prepared for the eighth and final stage of the Tour of Britain, an 86.8km criterium race (laps around a closed circuit) around a 6.2km route through central London, taking in Regent Street, Piccadilly Circus, Trafalgar Square, The Strand, and Whitehall.

This is what I learnt

The Tour of Britain is hard

When I arrived at the team base on Pall Mall on Sunday, there was movement and conversation amongst the team’s surviving four (of six) riders, but it was slow and quiet. Not quite the living dead, but every bit of remaining energy was being carefully conserved for the day’s racing, the eighth and final stage of the Tour of Britain.

The race is totally unlike the rest of the domestic race season, mostly criteriums and one day races, so it is difficult to prepare for and hugely physically demanding. Ironically, at the end of the Tour – with a few days’ rest – Continental team riders are better equipped than at any other time in the season to tackle the race. 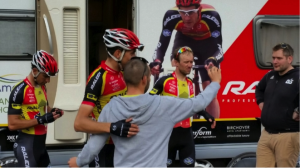 Exacerbating the physical demands is tiredness. Ideally, a professional cyclist needs between 8-10 hours’ sleep to recover after a day’s hard riding. Due to longer than usual transfer times between stage finish and start locations (a source of much consternation amongst teams), they were having to get by on 6-7.

…and the physical toll extends beyond tiredness – riders really do put their skin on the line.  George Pym, making his Tour debut at the tender age of 21, could barely sit down on Sunday due to significant chaffing!

Getting into a Break is a major achievement

Most stage racing involves a group which breaks off the front of the peloton and is gradually reeled in…or not – hence the excitement. I had always regarded these riders as sacrificial lambs sent out in front by Sporting Directors to gather valuable TV exposure for sponsors.

That these spots are valuable is true, but the riders have certainly not been sacrificed. Competition to get into the breaks is fierce and on races like the Tour of Britain, where World Tour teams ride alongside their less well-resourced Continental counterparts, and look to use their superior strength and experience to block efforts, it is a major achievement both to make one these breaks and then help make it stick.

You don’t need a velodrome to become Madison World champion

Amongst the Team Raleigh GAC riders is two-times Madison world champion, Morgan Kneisky. He will defend his title at the UCI World Track Championship in London next March.

Before then, the Frenchman will train for the track season in the hills and mountains around BesanÇon. Nearest velodrome 200 miles to the West in Paris!

Rally of London anyone?

Jumping into the team car before the start of the stage, driver and team owner, Cherie Pridham informed me that race organisers had imposed a 30 mph speed limit and ‘no screeching of tyres’ rule.

Careering down Regent Street to tackle the ‘Piccadilly Circus chicane’ at north of 70mph in pursuit of an excited peloton on Lap 1, I could see that these rules were going to be implemented to the letter.

Congratulations! …Now Get on the Tube 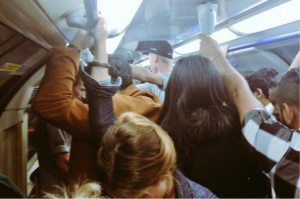 After the excitement subsided and it was time to head home, I was more than a little surprised to find myself sharing the Piccadilly Circus tube platform with stage winner* and world’s fastest sprinter™, Andre Greipel.

Apparently it was a rush to catch flights that prompted his transport ‘choice’, but even so… Following suit, can we look forward to seeing Chris Robshaw and Dan Carter in the queues at Twickenham Station in the coming weeks?

Tags: blog, cycling, inside the ropes, Sport, tour of britain,