Are the shifting media landscapes something to worry about?

Recently, this New York Times article was shared around the agency as one worth reading. And it is. It looks at the recent collapse and wobble of certain online news outlets, which when coupled with the closing of a number of high profile print nations in the UK, spells out a worrying time for the media landscape.

In the wake of that though, I had conversations with various teams about whether this was a cause for concern, an opportunity, or business as usual. As ever with these things, perspective is key. 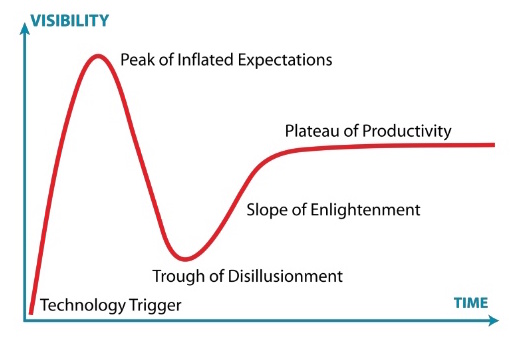 The counter argument is that the media is experiencing a normal cycle of growth and contraction. In fact, if you look at the Gartner Hype cycle, you can track the progress to date…

Back in the day there were a handful of national news papers and tv channels. That grew to hundreds of print media titles – Regional, national, magazines etc and a whole host of tv channels, many called Dave.

As the internet matured and become more accessible in the dot com/con boom, those media titles rushed to get online and give away their content…without any thought to monetising it. They wanted traffic to the sites so that they could sell more banner adverts. That was good enough. Just. They talked of future monetisation that never came to fruition.

However as the web continued to grow and become easier to use and social networks popped up allowing people to become content producers in their own right. Platforms like WordPress and Tumblr and Flickr, and then YouTube popped up allowing everyone to make a website or produce a video and be a publisher. The savvier users realised they could get a piece of the advertising pie so built their own online only media titles in the form of blogs initially, that grew to be websites (the distinction is arbitrary and grey) that started competing with the traditional titles. They stole readers and therefore ad revenue contributing to the contraction we are currently experiencing.

All the while, those print titles that survived, struggled. The internet continued to steal their print ad budgets. First the regional media, then the niche magazines followed by the national papers started to fold without the ad budget to support them. “Why buy a paper when I can read it for free online?” Coincidentally this is a similar issue that the music and film industry had/has. The sky didn’t fall though, we still have music and artists and now we have Apple Music and Spotify…So there is hope.

Now then, we have a period of natural reorganisation. Bad blogs/websites/media titles will die away. Poor writing and content will be punished. Poor management and reaction to changing platforms and consumption habits of the very readers that haven’t gone anywhere, but are suddenly faced with choice, will lead to the collapse of some of the big names. Its inevitable. Sad maybe. But inevitable.

So where are we on that hype cycle? Depends on your perspective and the timeframe you view from. If you step back to view it from a pre-social media time, we are currently on our way down the slope from peak of inflated expectations to the trough of disillusionment (sounds like one of my ski trips!). The market is sorting itself out. Competition is fierce and going to get fiercer. But a plateau will come. Some of that will come from a social change around the realisation that good content is worth paying for (the The Times approach using a paywall) and some of it will come from a structural change (Facebook realising the importance of quality publications in the ecosystem and sharing ad revenue with them – because without content producers, the social networks only have baby photos to share).

People will always want to consume good quality well written/produced content. That’s independent. That they can trust. So just like the music industry, the media industry will find a way of monetising. The Spotify of news? If you twisted my arm for a prediction I can see a future where I pay to access a service like Flipboard on my mobile devices. That service curates and collates content from everywhere allowing me to read the stuff I want, and apportioning a piece of my subscription fee to the writer of that content. Its a natural progression and will further weed out the bad content.

What can be done? Great campaigns and corresponding content, continuing to understand that our journalistic and influencer contacts are fighting to engage a more choosy audience. Branded content is a turn off for the reader, and therefore inevitably will be rejected more and more by journalists. If as communicators we continue to give them a good story though with a fun video that people want to watch or infographic they want to absorb themselves in, they will eat it up.

Journalism isn’t dying, its over saturated. And it will right itself in the end.