Over stimulated and over here – The NFL invasion

The third and final NFL International Series game of 2014 was held at Wembley stadium last week and a capacity crowd watched the resurgent Dallas Cowboys give the Jacksonville Jaguars the nailing they so richly deserve.

More of that later.

American football’s work to grow an already established fan base for its national sport here in the UK has once again, seemingly, been a resounding success with all three of this year’s games playing before sell-out crowds.

It has already been announced that the International Series – which started with a single Wembley game in 2007 and has expanded to three regular season games this year – will retain its increased level of visibility in 2015, when a trio of games will come to London again, including the first ever divisional match-up to be played outside the USA.

But, as it has been at around this time for each of the last seven years, talk has turned to whether or not there might ever be a London franchise team in the NFL.

Every year the NFL International Series has run in the UK, the chat has been much the same, although the NFL PR machine does ensure it edges that little bit closer each time; this year, that tantalising glimpse of what might just be came in the form of an NFL-backed study that revealed that a London franchise could raise £102m a year for the UK economy. Even George Osborne stepped into the debate this year and pledged government support for the plan after meeting with NFL executives.

It does seem that a London franchise is at least somewhere on the NFL’s radar and there certainly seems to be an appetite for it in the UK.

But is a true London franchise really the right answer for British fans?

Quite apart from the obvious logistical issues of having an NFL team based in London – and the performance disadvantage that would be presented by having to play teams over 5,000 miles away – I wonder whether a full-on London franchise would raise too many question marks over the fandom of existing supporters.

NFL fans in the UK fall broadly into two camps – the ‘heritage fans’ who started watching it since the mid-1980s when Channel 4 first started screening it and the newer, younger fans who have been enticed by the spectacle that has been the International Series games of the past few years. (Even this Sunday’s game attracted new blood; two members of the Performance family previously uninitiated went along and described it as “sport with ADHD”…)

Many of the older supporters already have a team that they are allied to – I consider myself a reasonably ardent fan of the Green Bay Packers and have been since I first started watching the sport years ago (with Brit Mick Luckhurst, who was a kicker for the Atlanta Falcons in his day, fronting the C4 programme; he was always very knowledgeable but had the charisma of a parsnip).

From those early days of the NFL in the UK, we know there are a lot of Chicago Bears, Washington Redskins, Miami Dolphins, San Francisco 49ers and LA/Oakland Raiders fans over here, because these were the teams that got the most exposure here back in the day.

But if fans here already pledge themselves to an existing NFL team, the prospect of a London team raises a serious dichotomy of allegiance. After all, how can you ditch the team you’ve supported for, in some cases, decades? On the flip side, a ‘local’ franchise would offer more access to the sport the NFL fan has loved than has ever been possible before.

The answer may lie with the new fans that the international expansion of the game has created – 50% of NFL supporters in the UK consider themselves fans of the sport as much as they do fans of a specific team. This is borne out by the sheer mix of different team jerseys that are evident in the Wembley crowds – all 32 teams are represented at every game and it is rare that either of the teams actually playing on the field have more of a share. 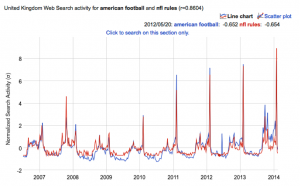 Looking at online search data, the number of people in the UK searching for ‘American Football’ also correlates strongly with the number of people searching for information about ‘NFL rules’, indicating that us Brits aren’t only in this for the cheerleaders and the pyrotechnics; it seems that the new intake of fans is interested in learning how an admittedly complex game works, too.

The make-up of the generic British fan may also allow for some leeway. Most football (soccer) fans have a ‘second team’ that they keep tabs on, even if they’re not spending their hard-earned on the merchandise.

As an NFL fan myself, I’m not going to switch my allegiance from the Packers, even though my team has always stated categorically that it will not give up a home game to come and play in an International Series game, an assertion that the general manager repeated last week.

But is my fandom for the sport itself and a modicum of national pride going to draw me to watch a London team play its home games at Wembley? Definitely. I won’t be wearing the home team’s colours, but I’ll be sat alongside half a stadium of new fans who are ripe for the NFL’s commercial exploitation and expansion.

Of course, if the London franchise turns out to be Jacksonville despite its owner’s claims this week, there’s another issue for the UK fan. The Jaguars are dreadful.

I’ll definitely stick to being a Cheesehead, thanks.