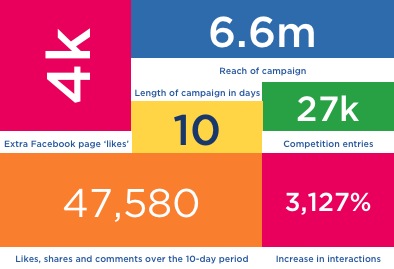 Citroën’s DS3 by Benefit Special Editions are targeted at a female audience aged 25-55, who have their finger on the pulse in terms of fashion and beauty. The campaign needed to talk their language by avoiding techy car jargon and focusing instead on the fun and stylish elements of the DS3.

The partnership offered an opportunity to reach out to the specifically female target audience and grow Citroën UK’s social media fanbase by running a competition with simple entry mechanics, coupled with relevant content and desirable prizes.

Citroën’s Premium B segment DS3 super mini sales are split 59:41% female:male. The market usually splits 70:30% female:male in this segment so there was a large untapped audience.

We wanted to capitalise on the female audience for this car by taking creative clues from the partnership with one of the UK’s best-known cosmetics brands. Benefit UK has a Facebook fan base of 755k loyal followers and offered a perfect platform to speak the language of these potential customers by positioning the DS3 alongside Benefit Cosmetics.

Through Citroën’s partnership with Benefit cosmetics on the DS3 by Benefit Special Editions, Performance Communications were able to tap into a large, loyal social media following as well as some promotional Benefit Cosmetics products.

Citroën hosted the makeup giveaway, with prizes increasing in value on a daily basis, on its own Facebook page and offered a simple ‘like’ or ‘comment’ entry mechanic that encouraged a large number of people to visit the Citroën page and take part.

The prize packages were selected and communicated through posts and images in such a way as to make the connection between the makeup products and the female lifestyle appeal of the DS3.