We are award winners!

As an agency we tend to avoid the spotlight; preferring to concentrate our time and effort on delivering results for the client. Someone significantly more important and intelligent than me once said: ‘You’re bloody brilliant at doing what you do, but shit at telling people how good you are’.

So, for a change, here’s a spot of self-promotion. 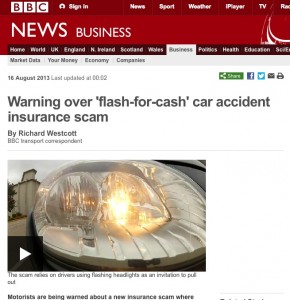 The story? In simple terms….an expose of how criminal gangs were flashing their headlights to beckon unsuspecting motorists into crashing into them. The results? Blanket BBC TV and radio, full page articles at the front end of 7 nationals and much more. The coverage was great but the campaign went far beyond airtime and column inches. It helped deliver credibility and authority for APU which, in turn, allowed them to open commercial doors that were previously shut.

There are many reasons why I’m chuffed to win, but above all, I’m proud because the campaign was one that took me back to the roots of the Performance DNA…good old fashioned, ‘front-end’ storytelling that shapes opinion and generates interest.

And the judges seemed to agree:

[quote align=”center” color=”#999999″]”The campaign was created from the insight of the fraud experts on the front line, and executed by a strategy encompassing traditional media relations skills, broadcast and digital tactics. A great example of an automotive PR campaign having a lasting impact and becoming a catalyst for cultural change within an organisation. With clear, simple objectives that were achieved with a modest budget, without the flash for crash campaign, commercial doors would still be closed.”[/quote]

Whilst the media landscape has changed, and continues to change, the fundamental way it works hasn’t.

Fourteen years ago, I was taking insight and data to write headlines that generated front page coverage and BBC 10 O’Clock News. Above all, they were stories that sold themselves. It’s like the pebble in the pond – if the story is good enough and you’ve got your strategy and tactics right, the ripples of coverage will naturally flow.

So there we have it, a spot of self promotion.

I’ll get back to doing what I prefer to do now; delivering for our clients.