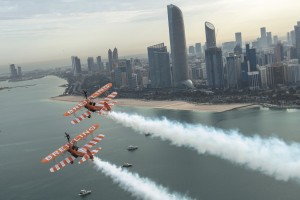 When Breitling does something, it doesn’t do it by halves. So when the Swiss luxury and aviation specialist watchmaker decided to get involved with the 2016 Abu Dhabi Aviation and Aerospace Week, the world’s largest high profile, dedicated aerospace and aviation week, there was never any chance of the brand opting for a low-key approach.

Firstly, Breitling announced a partnership with Abu Dhabi Air Expo. As well as being named ‘Official Timekeeper’, the Swiss brand also confirmed that the highly popular Breitling Wingwalkers, the world’s only aerobatic formation wingwalking team, would be showcasing their skills at the event. What better opportunity to get some of the region’s leading media to test their nerves and try out this extreme sport for themselves. 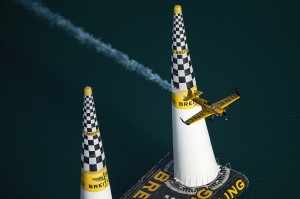 As the focus for the week moved to the water’s edge at the capital’s Corniche, the Breitling Racing Team, led by experienced pilots Nigel Lamb and François Le Vot, took to the air in the Red Bull Air Race World Championship. And the Performance team was with them every step of the way, seeking out PR opportunities and quite simply enjoying the literal highs that come with PR’ing such an exciting brand as Breitling.