In December 2014, Performance Communications worked with luxury Swiss watchmaker, Breitling and its global ambassador, John Travolta to unveil the new Breitling Emergency in the UAE. As the Emergency is the world’s first wristwatch with a built-in-personal locator beacon, which can alert emergency services of the location of the wearer in life-threatening situations, we wanted to host a launch event to remember.

We were tasked with conceptualising and managing all elements of the Hollywood star’s visit, from selecting the five star accommodation to hosting a spectacular evening launch event. With only one day to play with we wanted to maximise all PR opportunities through daytime and evening media activity.

During the day the Breitling team hosted ten of the Middle East leading publications, including print, television and radio outlets. The media were given exclusive one-to-one interviews with the man himself.

For the evening event we wanted to bring the essence of the lifesaving product to life through a live ‘emergency’ stunt. As 300 media and VIP spectators watched from the lawn of one of Dubai’s most exclusive hotels, the watch was delivered to the stage via helicopter, Jet Ski and motorcycle. 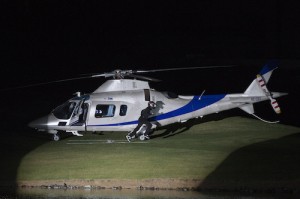 Flashing emergency lights and the sound of an emergency siren added to the excitement of the stunt which climaxed with the arrival of John Travolta on stage – we even managed to fool a number of guests into thinking the stunt man was John Travolta himself.

Following the big reveal a short presentation was given from John Travolta and Breitling Vice-President, Jean-Paul Girardin. Guests then enjoyed the bespoke surroundings whilst being entertained by international dancers.